Fortunately, that’s not the only iOS 12-centric vulnerability floating around in the wild these days. As it would seem, a Safari-based exploit targeting iOS 12.1 and below (and macOS10.14.1 and below) was also released this week by iOS tinkerer Linus Henze.

Want a free Safari 0day? (Ok, it’s actually a 1day because it’s fixed in the latest WebKit version, but it still works in the latest version of Safari) Then go to https://t.co/CD9IwHUQP8

This is an optimization error in the way RegEx matching is handled. By setting lastIndex on a RegEx object to a JavaScript object which has the function toString defined, you can run code although the JIT thinks that RegEx matching is side effect free.

KeenLab was one of the first security firms to demonstrate that an iOS 12 jailbreak was possible, but it was never released and kept internally for testing purposes.

Given the circumstances, we don’t recommend upgrading to iOS 12 if you’re already jailbroken. If you’re not jailbroken, and you’re waiting to jailbreak, then you should stay on the lowest firmware possible. 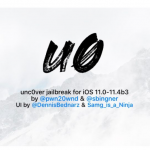