Concept designer Antonio de Rosa has come out with a new spoof iPhone ad that shows how Apple could easily remove the notch by adding a slide out camera to the top of the iPhone. Xiaomiactually implemented the idea on its latest flagship phone, but after watching this video, you might start jonesing for Apple to do the same.

The biggest problem with adding a slide-out camera to the iPhone is the fact that moving parts break easier over time. Apple has actually been trying to eliminate all moving parts over the last few years, so it’s hard to see the iPhone-maker actually using this idea in the future.

Other features on Avini’s concept include a quad-lens camera that snaps 24MP photos and can take 3D images. Touch ID has also been added to the back of the iPhone behind the Apple logo. None of those features are likely to make it into the 2019 models.

It’s still early enough for a lot of 2019 iPhone rumors to change before the fall, but this year’s new models will probably be a lot more lackluster than this concept. New features will supposedly include USB-C, a three-lens camera in the back, A13 processor, smaller Face ID notch and some other internal tweaks. 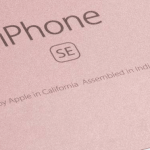