A leaked Alipay marketing material also pointed to iOS 13.4 being released on March 17th, though it was later found to be fake. iOS 13.4 is a major point release from Apple that packs a number of new features and enhances existing ones as well. More importantly, perhaps, it packs a number of bug fixes that iOS 13 sorely needs.

If you are looking forward to the release of iOS 13.4 and are wondering when it will be released in your time zone tomorrow (March 17th), check out the image below. Apple tends to release new software builds at around 10 AM PST/1 PM EST and it should follow a similar timeline with iOS 13.4 as well.

If you don’t find your city on the list of 143 cities, then head over to TimeandDate to find out iOS 13.1 release time in your time zone. 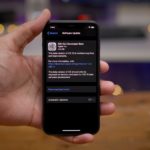 Apple has 30 reasons for its users to install iOS 13.4