Both Ariana Grande and Florida Georgia Line are nominees for the 61st Grammy Awards. These new ads came after the Cupertino tech giant ahead of this year’s 61st annual Grammy Awards posted Memoji-themed billboards around Los Angeles.

Essentially a customizable Animoji, the feature made its debut alongside iOS 12 and is only compatible with the TrueDepth camera-enabled devices. If you’d like to create your own three-dimensional avatar for the Messages app and FaceTime. 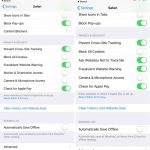 Latest Safari Betas Remove the ‘Do Not Track’ Feature